Photo by Robert Crawford at Unsplash

After years of being held emotionally captive, a recent event severed the ties that had me bound and I was set free. He made a choice to finally let me go. It was conscience and intentional. It was shocking.

We’d been estranged for years and years at my choice. It was the only way I felt safe, the only way to keep my girls safe. But he never stopped playing this game with me where he pretends to “fix” the relationship with apologies, admissions, promises, etc. only to break it again with lies, omissions, excuses, and more lies, all the while blaming me.

I attended a family function that resulted in us having to be in the same room. I stood and waited for that dreaded inevitable moment, that always happens at these things, when he would attempt to talk to me, hug me, and pretend everything was normal, that his abuse did not exist. It never came… no eye contact, no words, no hugs, no pretending. In one swift motion it was as if he signed away any legal right he ever had over me, like we had never known each other. The phrase “severed parental rights” continued to flash through my mind and I was fine. Happy. Relieved. Free.

For the first time in years I felt truly free, untethered, until 2 days later.

So what was wrong? Why did I suddenly feel emotional, overwhelmed, weird? I searched my feelings, my mind, and my heart. Was I sad because of what had happened? No. Was I disappointed for being disowned? Nope that was not it. What in the world was going on?

Slowly from deep in the recesses of my mind I actually heard the question “What happens when freedom sets you adrift?”. I know it’s weird, but questions are how my mind processes. It was like a lightbulb came on over my head. I understood where the emotions were coming from, it was the feeling of being set adrift.

It was as if I was in a tiny boat in the middle of the sea having been released from the pirate’s ship, like I had been innocently imprisoned for years and then suddenly and randomly set free.

The feeling reminded me of a mini-series called “I Know My Name is Steven” that was on TV when I had my oldest daughter (yes I watched while I was in labor). It was about a boy who was kidnapped, abused and held captive for years until his perpetrator was busted and the boy was returned to his family. He was now a teenager and had been changed by life and experience,  but they still saw him as the young boy they lost years before. Needless to say it was difficult to adjust. He had been set adrift by his freedom and now needed courage to find himself inside of his family again.

We love the idea of freedom and people deserve to be free, but freedom is a very broad, overwhelming and abstract concept in reality. Sure no one wants to be chained, held, bound, or imprisoned long term, but we tend to like boundaries, limits and structure more than we care to admit. The order provided by such things often gives us direction and a sense of comfort.

Example: Imagine someone gives you a blank piece of paper and tells you that you can draw or write anything you want, where do you start? Do you feel overwhelmed? Uninspired? Blank? Or are you like me and you just revert to writing your own name and/or drawing the same flower you’ve been drawing since grade school. A blank slate tends to freak most people out because it lacks boundaries and structure. Write a story. Travel anywhere in the world. Sculpt something out of clay. Buy a house and live anywhere you want. These all sound like wonderful ideas, until you actually try to implement them. Over and over I have heard people say something like “If I had such and such amount of money I would do _____” and then they later have money in hand and have no idea where to start or what to do. Unfettered freedom, even in creativity, can be terrifying and deserves to be respected.

So what does happen when freedom sets you adrift in the wide open sea? You can either panic/head back to your captivity or you can start rowing into your freedom. If you can see land, trusted family or help, then head that way. For me, I am going to chase the sun and not look back! I am going to find the courage to live in my freedom. I am going to write, draw and sculpt something out of this life of mine and be happy with it. 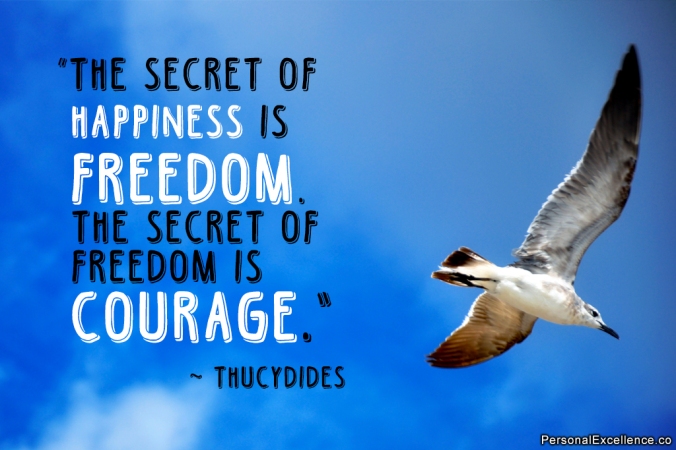 2 thoughts on “What Happens When Freedom Sets You Adrift?”

Follow Just A Little Talk With Nonie on WordPress.com
Join 59 other subscribers

What I’ve Been Talking About Lately

This is not a crochet blog

I want to be rich. Rich in love, rich in health, rich in laughter, rich in adventure and rich in knowledge. You?

all questions answered all answers questioned

Turn and print all your digital contents, blogs and social networks into amazing real paper books on blookup.com

I Prefer Not To.

Submit your film and get it shown at the festival that runs 3 times a month.

Daily Prompts for the Soul

A writing prompt a day keeps the writer's block away.